By integrating science and history, this course will examine the scientific evolution of nuclear weapons and the historical context in which they were developed. World War II made urgent the exploitation of atomic power for military purposes. We will explore the scientific thought that made harnessing nuclear energy possible, the political pressure that shaped that process, and the ramifications of the bomb for science and politics during and immediately after the war.

Our primary goals are to provide a dynamic learning environment for students and alumni, centered on these fascinating historical events. Of equal importance, we hope to foster new connections between alumni and students, strengthening the Colgate community in the process.

Enthusiasm, curiosity, and an open mind. 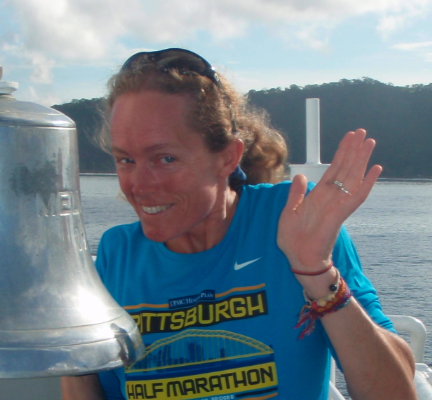 Dr. Karen Harpp is a volcanologist trained in chemistry and geology, who has taught a Core Scientific Perspectives course on the atomic bomb at Colgate University for longer than she’d care to admit (ok, it’s 15 years). She is also a member of the Peace and Conflict Studies Program, where she team-teaches a course on weapons and war. She believes that science can be learned best when it is viewed through the lens of current and historical events. She has won several teaching awards during her career for making science accessible to people from all types of backgrounds. Over the years, several of her Colgate bomb classes have visited Japan to study the effects of the weapons and meet with survivors, scholars, military personnel, and students. They have also traveled to Washington DC to learn about nuclear weapon design and maintenance, examine the newly restored Enola Gay, and meet with other political and military representatives involved in related efforts. Harpp’s research investigates the processes that drive volcanic eruptions, which she has studied with Colgate students in the Galapagos Islands, Iceland, Antarctica, and Japan, among other locations.

Colonel Scott Willey, USAF (Retired) has a background in engineering and systems management. Part of his career was served in the Strategic Air Command, and he spearheaded the in-air refueling program for the KC-10 airplane. For over 30 years, he has been a volunteer docent at the National Air and Space Museum, where he was one of the restorers of the B-29 Enola Gay, among many other airplanes and equipment currently displayed in the facility. He has been an integral part of the Colgate University atomic bomb class since 2002, when he gave one lucky group of students a tour of the airplane in the midst of its restoration; recognizing his remarkable ability to engage students and his vast knowledge about World War II, Harpp hasn’t let him off the hook since then. He has also contributed extensively to the Peace and Conflict Studies course, Weapons and War, for more than a decade, bringing his insight into weapons procurement systems and their complex politics that he has gained through his work with the Pentagon and NATO. He regularly gives invited lectures across the country on military history and weapons procurement, and we are truly fortunate to have his contributions to this online project.

Who can participate in this online project?

Only Colgate students who are currently enrolled in the Atomic Bomb class (CORE 138) and Colgate Alumni are eligible to participate in the course.

Do I need to buy a textbook?

The class will be using the Pulitzer Prize-winning book by Richard Rhodes, The Making of the Atomic Bomb, as well as Hiroshima's Shadow, edited by Kai Bird and Lawrence Lifschultz. As alumni participants, it's up to you whether you want to do the readings or not; the students of course will have to do them! You can, of course, order the books from the Colgate Bookstore.